"A writer-- and, I believe, generally all persons-- must think that whatever happens to him or her is a resource. All things have been given to us for a purpose, and an artist must feel this more intensely. All that happens to us, including our humiliations, our misfortunes, our embarrassments, all is given to us as raw material, as clay, so that we may shape our art."

"Writing is nothing more than a guided dream."

"The mind was dreaming. The world was its dream."

"You have wakened not out of sleep, but into a prior dream, and that dream lies within another, and so on, to infinity, which is the number of grains of sand. The path that you are to take is endless, and you will die before you have truly awakened."

"A book is more than a verbal structure or series of verbal structures; it is the dialogue it establishes with its reader and the intonation it imposes upon his voice and the changeable and durable images it leaves in his memory. A book is not an isolated being: it is a relationship, an axis of innumerable relationships."

I've been reading short stories and essays from "Labyrinths", a compilation of some of his work.
How can  I describe the originality of his work? I can say that his stories are inspiring to the mind. He writes about the infinite, dreams, labyrinths and immortality. He creates imaginary and symbolic worlds while playing with the possibilities of time and space.
His stories have historical, literary and philosophical allusions. Even if you can't grasp everything he intends to communicate, reading his stories awakens and fuels your imagination.
Borges opens doors to unknown infinite corridors in the tunnel of the mind. He invites you to see the universe from imaginary perspectives. The power of his originality is intense. His prose is poetic and profound.
Borges never wrote a novel. He crafted short stories, essays and poems. He identified himself first as a reader, then as a poet, and finally as a prose writer. Sometimes the boundaries between fiction and non-fiction  in his stories are blurred.
Borges was born in Argentina, but he was nurtured on universal literature. His spiritual homeland was the world. In Argentina he was at odds with the Peronist dictatorship. For political reasons he lost his job as a librarian.
"Any great and lasting book must be ambiguous, " he said.
His international recognition came with the 1961 Formentor Prize, which he shared with Samuel Beckett.
I shared a couple of his poems on my blog not long ago:

Everness
The Art of Poetry

Happy birthday, Jorge Luis Borges. Thank you for your legacy.

I who am singing these lines today
Will be tomorrow the enigmatic corpse
Who dwells in a realm, magical and barren,
Without a before or an after or a when.
So say the mystics. I say I believe
Myself undeserving of Heaven or of Hell,
But make no predictions. Each man's tale
Shifts like the watery forms of Proteus.
What errant labyrinth, what blinding flash
Of splendor and glory shall become my fate
When the end of this adventure presents me with
The curious experience of death?
I want to drink its crystal-pure oblivion,
To be forever; but never to have been. 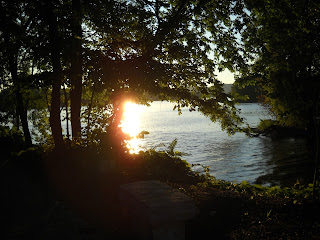