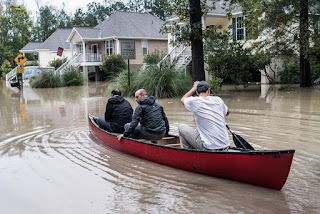 "All truth passes through through three stages. First, it is ridiculed. Second, it is violently opposed. Third, it is accepted as being self-evident."
Arthur Schopenhauer, German philosopher(1788-1860)
Source of photo used in this post: http://time.com/4061371/south-carolina-flooding-climate-change/ 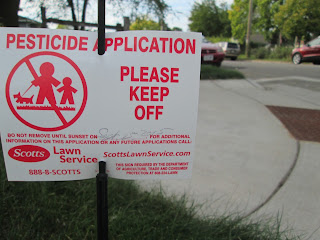 In the year 1962 a woman stirred the waters of conformity and ignorance by writing and publishing a book. Her name was Rachel Carson. She wrote about the ecosystems and  about how the misuse of pesticides exacerbates the problems with insects and weeds instead of controlling them. She also delved into the effects of many of these chemicals on human health. Why is this important? 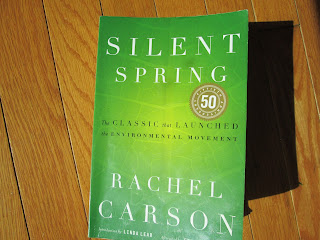 Fifty three years later her book “Silent Spring” continues to have relevance: the food we eat and the water we drink contain pesticides. The case of Atrazine can be used as an example to illustrate how her words resonate today.
Atrazine is a pesticide used to kill weeds. Research has shown that Atrazine can cause cancer in mammals and developmental problems in fish. It also changes male frogs into females. The European Union banned the use of Atrazine in 2004. The corporation that manufactures this chemical is in Switzerland (Syngenta). I surmise it has “power” over the decisions made by EPA because in the United States of America Atrazine continues to be used.  90% of the drinking water in the United States of America contains Atrazine.
We signed a petition to encourage the authorities to ban the use of Atrazine, but so far nothing has changed. (Profits matter more than human health and the environment).

Reading Rachel Carson’s Silent Spring motivated me to learn more about pesticides and the current situation.

The use of glyphosate
The most well-known glyphosate is “Roundup. It is manufactured by Monsanto.
The use of glyphosate is associated with birth defects, cancer, miscarriages and stillbirths. In the year 2010 Professor Andres Carrasco of Buenos Aries Medical School in Argentina published his findings on the effect of glyphosate (Roundup) on chicken embryo. He decided to work on this kind of research after observing what happened to the people who live close to the farms. However, Monsanto still claimed that its Roundup product was safe.
There were violent attempts to silence Carrasco and his group. Four representatives of Argentina’s crop protection trade group CASAFE tried to raid his laboratory. He was also the focus of an orchestrated attack in which three people were seriously injured when he was in an agricultural town in Argentina called La Leonesa, where he explained the findings of his research. Carrasco escaped injury by locking himself in a car.
Glyphosates started to be used in La Leonesa in 2000. Birth defects increased fourfold in the region around the town between 2000 and 2009, and the rate of childhood cancers tripled over the same period.  Glyphosates are still used in Argentina. Again, profits matter more than human health.

Despite the hazards associated with the use of these chemicals manufactured by Monsanto they are also used widely in the United States of America, not only to grow food but also to control weeds in parks and pavements. On the other hand, countries like the Netherlands, Denmark, and Sweden have either banned glyphosate or have restricted its use.
Roundup is spread on about 12 million acres of American farmland every year. Now the so-called "Superweeds", which are resistant to Roundup, are emerging. Rachel Carson discussed these patterns of resistance and an exacerbation of the original problems as a result of the abuse of pesticides.

Rachel Carson also explained  that pesticides contained in runoff from farms and forests are being carried to the sea in the waters of many rivers. She pointed out that the funds to research the changes that these chemicals undergo during the transit period are small. She proposed that some of the money invested in the development of toxic sprays should be used on research to use less dangerous materials and keep poisons out of the waterways. Then she asked the following question: when will the public become sufficiently aware of the facts to demand such action? Her question is relevant today.
What can we do?
Educating ourselves and our communities is our duty.
Make wise choices. Reduce your chemical imprint.
Support organic farming practices.
Environmentalists are urging farmers to adopt the principles of integrated pest management (IPM), which encourages the use of less toxic products and the use of other methods. Ladybugs, for example, are the natural enemy of many insects.
The EU encourages the reduced use of pesticides on farms and in homes. It has created a directive on the sustainable application of pesticides. 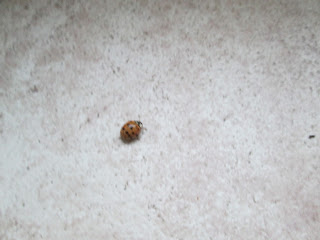