An interview to Chrystalla Thoma 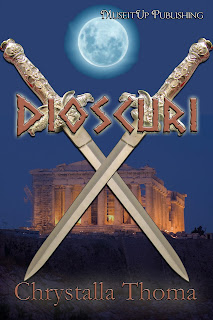 Today I have the honour to interview a gifted fantasy writer, Christalla Thoma. Christalla has published many short stories in different literary journals, and she is now going to tell us about her life and her latest fantasy novella, Dioscuri, published by Muse It Up. Thanks for your visit, Christalla!
Hi Chrystalla! Why don’t you tell us a few words about yourself first?
Sure. I am Greek Cypriot, so I was raised on Greek myths and souvlaki. I escaped Cyprus when I was 18, and went to study in France, then in England and Germany. By the time I started thinking about returning to Cyprus, I met my husband, Carlos, who is Costa Rican, so my next stop was Costa Rica for a few years. Now I am back in Cyprus, with Carlos, and am now famous for importing handsome men. :-) When not reading or writing, I work as the European countries officer and Magazine editor for the Thalassaemia International Federation.
What an interesting life! You have lived in different countries and have been exposed to different cultures. Why do you write?
I write because I must, because I need to rework all that happens to me, all I desire and cannot have, all I wish and hope for, into stories – so that I can explain the inevitable and the terrible, transform the nightmare into a happy ending.
What do you think is the most important thing about writing fantasy?
As all stories, fantasy stories require strong characters, a motivation, and obstacles strewn in their way. But in fantasy, a vital element is the mystery of the symbols, the magic, the swift and unexpected transformation, the crossing between the worlds of the dead and the living, the power unleashed that equals no other, and the mythical structure of the fairytale.
What do you think is the attraction of the fantasy genre?
Fantasy allows us to dream and travel free where reality does not allow. Fantasy is religious, ritual and transcendental. From ancient times, around the fires in the caves, man explored the unknown through tales of magical power. Man has not changed. We still need these tales today.
What inspired you to write Dioscuri?
Don’t you find twins fascinating? The fact that they are so similar and yet so different, like images distorted through a special mirror. The idea of writing the two point of views, so different, was exciting. I also love their myth – I love the idea that they were born from an egg when Zeus courted Leda in the form of a swan. It reminds me of the myth of Eros, born from an egg in the primordial chaos, from which he created order – making the egg parts into the earth and sky. Finally, I loved the idea that the brothers’ affection for each other defeated even death. How’s that for a happy ending! J
Dioscuri is a retelling of a myth – so is it set in the past?
No, Dioscuri is Urban Fantasy set in a contemporary Athens where the mortals have by mistake woken up the ancient gods. A Resistance group is barricaded in the secret passages inside the Acropolis rocky Hill, and squadrons are sent out to battle monsters as they emerge from the underground and the construction sites where the mortals have unwittingly tapped into the sleeping chambers of chimeras, lamias, echidnas – the stuff of nightmares. The ancient monsters can only be defeated through the use of ancient swords and ruses. On the side of the mortals are the griffins, the satyrs, the silenes and the nymphs. Meanwhile, the higher gods wage battle in the sky.
Are you planning to write most stories set in the world of Dioscuri?
Actually, yes, I am currently writing two more retellings of myths set in the same world: Theseus and the Minotaur, and Perseus and Andromeda. The stories explore the themes of family relations and conflicts, affection between siblings and parents, and our obligation to the gods and our own conscience.
Can you give us any links to your blog, and to the story?
Of course! Here is the link to the story, and to the trailer:

http://www.youtube.com/watch?v=DuIGv15Vdmc&feature=player_embedded
Here is the link to my blog:

http://chrystallathoma.wordpress.com
What advice do you have for other fantasy writers?
To read all that is fantastic – myths, folktales, riddles and religious texts. To set their mind free from all constraints. Theirs is the chance to truly escape from reality and into magic, and to help their readers along.
Posted by Julia Hones at 12:49 PM 8 comments: