Description of places in creative writing 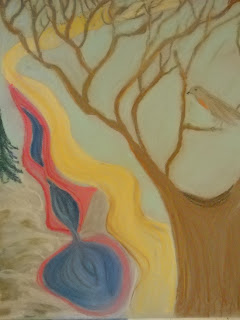 As readers we love to be immersed in the places where the stories unfold. This does not necessarily mean that lengthy descriptions are needed. Sometimes two or three lines can be  powerful enough to achieve our purpose.
As writers we can encourage readers to experience a place through all the senses:
-sight
-hearing
-touch
-taste
-Perception of movement
In addition to being an exciting invitation that awakens the reader's senses, a vivid setting can be deeply enmeshed in the characters and the tension.
Let's examine some paragraphs from stories by well-known writers:

"It was a bright day, a hot day, the day old Mr Prescott died. Mama and I sat on the side of the seat of the rickety green bus from the subway station to Devonshire Terrace and jogged and jogged. The sweat was trickling down my back, I could feel it, and my black linen was stuck solid against the seat. Every time I moved it would come loose with a tearing sound, and I gave Mama an angry 'so there' look, just like it was her fault, which it wasn't."
This is the first paragraph of "The Day Mr Prescott Died" by Sylvia Plath. I almost had to wipe my back after reading it. Can you feel the heat on your skin? I can almost smell the fumes of the bus and hear the engine, and we are just starting to get inside the character's mind.

"The mornings were beautiful. The snow flanked the paths in long, unbroken curves. We could put our heads into it and sift it about like sand and then shake every grain off our fingers. Up in the pine forests the trees were like sugar trees. After a while all this whiteness hurt the eyes and it became scarcely possible to see anything. Between the grizzled pines flashed the splinters of the low sun and above was the pure enamel blue of the sky."  This is a paragraph from the story "In a Winter Landscape" by Olivia Manning. This scene is very intense. It is a cool scene. The writer invites you to touch the snow, not just to look at it, and we imagine the sun rays sneaking between the trees. Let's continue reading the next paragraph of this story:
"Near the hotel was a little lake with a tea-house built out into the water for summer visitors. The tea-house was a shabby red, but now, outlined and glittering with frost, it had a Japanese look. The snow had been swept from the ice and a loudspeaker broadcast dance music; a few skaters pressed forward and turned and  lifted feet to the rhythm of the music. People stood and watched them." The writer makes it very vivid by contrasting the red color of the tea-house with the snow. There is music; people are skating to its rhythm.  Three senses are involved now ( sight, hearing and touch).

"Whenever we children came to stay at my grandmother's house, we were put to sleep in the sewing room, a bleak, shabby, utilitarian rectangle, more office than bedroom, more attic than office, that played to the hierarchy of chambers the role of a poor relation. It was a room seldom entered by the other members of the family, seldom swept by the maid, a room without pride; the old sewing machine, some cast-off chairs, a shadeless lamp, rolls of wrapping paper, piles of cardboard boxes that might someday come in handy, papers of pins, and remnants of material united with the iron folding cots put out for our use and the bare floor boards to give an impression of ruthless temporality. Thin white spreads, of the kind used in hospitals and charity institutions, and naked blinds at the windows reminded us of our orphaned condition and of the ephemeral character of our visit; there was nothing here to encourage us to consider this our home."
The writer threads the character into the place here. The analogy between  the gloomy room and the character's condition of being an orphan ignites intrigue and paints a vivid scenery. This story is "Yonder Peasant, Who Is He?" by Mary McCarthy.

Words have the power to create the proper atmosphere, inviting  the readers' minds to swim through our stories effortlessly.
Isn't this fascinating?