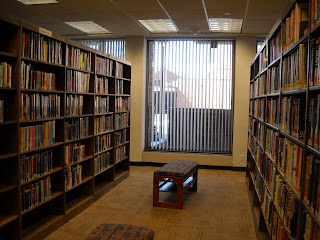 “I have always imagined that will be a kind of library.” Jorge Luis Borges

I began taking my daughter to the library when she was a baby. She associates the word “library” with fun and entertainment. My daughter loves to read books, but libraries are not just about books.
There are many reasons why I have so much respect for libraries:
-They are places where people of all ages and backgrounds can go to both educate and entertain themselves.
-They allow you to have access to a vast array of free books, e-books, magazines (online and in print), internet and professional assistance
-They offer technology training
- They provide access to job-search resources
-They contribute to support entrepreneurship and lifelong learning
-They are community centers where people socialize. Libraries connect people
-They offer cultural and educational events
-Their unique variety of resources is an asset to research

I find libraries fascinating. They inspire me to dream, reflect and make discoveries. I am very thankful for the wonderful libraries I visit and for the librarians who work in them. Supporting them in any way I can makes me feel good.
I grew up in a small town in Argentina where the little library survived thanks to the cooperation of the people, so I don’t take the ones here for granted. When I visit my parents, once a year, the little local library is like my second home. I like to lose myself in it. Sometimes I find old books that bookstores don’t  sell anymore. It is like a trip to the past, an exploration of forgotten lands.
Four years ago I was deeply touched to know that Brad Pitt had picked this little library in the town I grew up to donate books . I still wonder how he found it...
What about you?  Share your experiences with libraries.
(I will take a break from writing my blog for two weeks, but I will be reading your blog posts).
Happy Easter.

Email ThisBlogThis!Share to TwitterShare to FacebookShare to Pinterest
Labels: National Library week, why libraries are important, why libraries matter 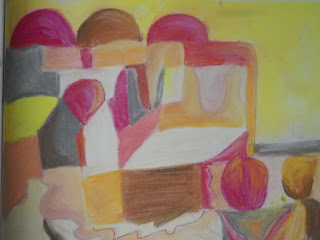 "In the midst of winter, I finally learned there was in me an invincible summer." Albert Camus

Last Saturday I attended an international film festival at the university in the city where I live.What you  can see with a four-year old child is limited, but we managed to watch two documentaries. One of them was called "Happy".
Seeing this documentary confirmed my ideas on happiness. Let me share with you some of the most important points:
-Once the basic needs are covered studies found that more money will not make people happy.
-Those who associate happiness with money and material possessions are less happy than people who associate happiness with family, friends and things they like to do.
-Forty percent of our happiness depends on our genes. People under the same circumstances will have different levels of happiness.
-Studies showed that when people help each other, there is a release of chemicals in the blood that are associated with feeling happy (endorphines, dopamine, oxytocin). On the other hand, when people compete they feel stressed.
-People feel happy when they are "in their zone", which means that they are engrossed in doing something they love to do; during this time, they let go of worries and anxiety.
-Exercising and having fun make people happy. Again, this is associated with the release of brain chemicals I mentioned above.
Happiness is  not a complicated emotion to me. Being with my daughter, my husband, helping others, doing things I love, looking at the sunset, staring at the naked branches of the trees in winter, being in touch with nature are some of the many things that make me happy.
This doesn't mean that I never feel sad, anxious or worried, but I think my happiness has to do with a sense of gratitude. It has to do with embracing the present without fretting over the future...
What makes you happy?

Mozart's Sister and some reflections 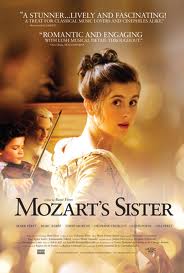 "Hope is the thing with feathers
That perches in the soul,
And sings the tune without words,
And never stops at all."
Emily Dickinson

First some more good news! My short story "The Broken Wing of Your Ideal" was selected for the Freedom Forge Press Anthology, which will be released in July 2013.
Dear followers, thank you so much for your ongoing support! It means a lot to me.
A few days ago I watched the movie Mozart's Sister.After watching this movie I wondered about all the talent that has been squandered for so long. Scientists, artists, writers, musicians. Have you ever thought about this?

Even today, in many cultures, being a woman still means being a second-class citizen.
In Saudi Arabia, a rich nation, women need permission from their husbands- or a male relative if they don't have a spouse - to work, study or travel. They are not allowed to drive, and millions of them are not allowed to practice sports.
Last January people took to the streets to demand reforms, but they were intimidated, punished and harassed by the government. As I write this, more people are detained for protesting. You can read about this matter here:
http://www.cnn.com/2013/03/01/world/meast/saudi-arabia-protest/

Not too long ago, a woman was almost killed in Pakistan for supporting education for girls..
In many cultures, having  a baby girl is considered a bad situation. Girls are less likely to have access to  education. They are denied property rights and are forced to marry young.  An interim report from the Global Campaign of Education  states that girls cited parental preference for their male siblings. To read more on this, check this link:
http://www.campaignforeducation.org/en/campaigns/gender-discrimination
www.theirc.org

In certain countries and cultures, thousands of little girls are subjected to genital mutilation (clitoridectomy or infibulation), a procedure performed without anesthesia, and associated with several complications including infections, bleeding and chronic pain.
If you think that gender discrimination is a problem of the past where you live, think again. Are you not biased by the idea of gender? A study done at Yale  showed that both men and women faculty were equally biased by gender when they assessed their students. Here is the link to the study.
"Female faculty members were just as likely as their male colleagues to favor the male student. The fact that faculty members’ bias was independent of their gender, scientific discipline, age, and tenure status suggests that it is likely unintentional, generated from widespread cultural stereotypes rather than a conscious intention to harm women."
Not surprisingly, there is a study that shows that there is disparity between men and women in the workplace. Women earn less money for working the same number of hours, and the more hours they work the less they make compared to their male counterparts.

So when does the problem start? Pre-school perhaps?
The first step to end gender discrimination is to acknowledge it. Both men and women are responsible for eradicating the biases from their minds.
It is a work in progress...