The beauty of reading a good anthology is in the opportunity they give me to come across interesting authors. I wrote a review of A Literary Christmas for GringoLandiaSantiago. Here is the link to it:
http://www.gringolandiasantiago.com/2011/12/26/a-literary-christmas/
Posted by Julia Hones at 7:59 AM 7 comments:

I started my literary blog on December 23 2010, so it turned one year old yesterday. It has been a special place where I dare to share my thoughts, review books, connect with other writers and share my writing experiences. It is a journey that encompasses creativity, passion, persistence, and so much more. I'm always looking forward to the next challenge and surprise. 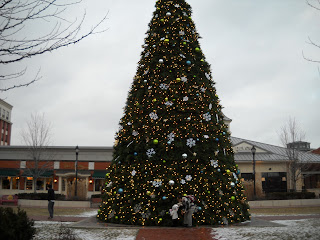 Thank you for reading me. Happy birthday to my blog, Merry Christmas and happy New Year. May 2012 be a year filled with inspiration, love and hope for everyone.
Posted by Julia Hones at 1:55 PM 7 comments:

More on writers taking risks and a short story

The other day I wrote about the fact that writers need to take risks when they write and, on that same day, I finished reading a short story by Ivan Klima from "A Literary Christmas", an anthology by Lilly Golden. The name of the story is "A Christmas Conspiracy tale".
In this story, the narrator, Ivan, is a writer who is coaxed into selling carp and cheating his customers to make extra money. The main character lives in a society where cheating is the rule, even politicians do it. Honest people are the ones who are ostracized and can end up in prison for nothing.( Paradoxically, they are the ones considered the conspirators and jailed). In the end, the swindle does not work out well for Ivan.
The meaning or epiphany of this interesting story is that in societies where rules are disregarded, honest people sometimes are influenced by the system, but, not surprisingly, Ivan is a misfit among the conspirators. He does not feel like one of them and ends up being betrayed by them.
The story shines with social criticism. Ivan Klime was born In Czechoslovakia. In 1941 he and his family were sent to a concentration camp  after the invasion of his country by Germans in 1938. He was released in 1945 but he lost his family during the ordeal. Later in life, he had to endure the oppression of corruption in communist Czechoslovakia. I believe this story reflects on that. Ivan Klima's work was banned there for dealing with inconvenient truths.
Here is an interesting interview done by the BBC to  Ivan Klima. I learned a lot from it and I look forward to reading more by him.
http://www.bbc.co.uk/radio3/johntusainterview/klima_transcript.shtml
Posted by Julia Hones at 4:04 PM 4 comments:

If we don't take risks, we may end up boring the readers. This is my opinion, of course, so don't take this statement to heart.
From my own experience as a reader I can conclude that the stories that I like the most are the ones that take risks.
What does taking risks mean?
A way of taking risks, for example, is  by exposing issues that can spark controversy, or that are normally pushed aside because they may be inconvenient. When we take risks  we explore themes with refreshed eyes without being preachy. We let reality shine by itself as we show characters and events.
Taking risks means writing about something with honesty, digging deeper into subjects we may fear. I believe most readers will appreciate this honesty and even fall in love with it, but we need to accept that some of them will despise it, dread it or even feel uncomfortable.
Characters drive my stories, so I feel devoted to them. My characters are human beings, so they harbor contradictions. I am a keen observer of peoples' behaviors and attitudes and I pour much of this into my own writing.  Human beings are far from perfect. They can be the source of both good and bad actions. They can be kind, but their actions can also be the result of envy when they don't feel they've fulfilled their own lives. They can be carried away by greed, pride, or insane competition. Some critiquers occasionally like to point out "Oh, but this character is contradicting herself. Oh, but this character is making a mistake." If we want to create realistic characters in adult fiction we need to accept our characters' foibles and embrace them. Perfect heroes don't appeal to me.
I appreciate unique realistic characters with both positive traits and weaknesses. In doing so, I'm taking the risk of annoying some of my readers. It is to be expected. We can't please all our readers, can we?
Do you take risks when you write? What kinds of risks do you take?
Posted by Julia Hones at 7:44 AM 9 comments:

The artist at work

Gilbert Jonas found his true passion: painting. He is an artist who believes in his star and acknowledges that he will be granted much without ever deserving anything. He becomes  very popular and is offered to live on a monthly remittance awarded to him by a picture dealer. His wife is devoted to him and their three kids, and even though they hardly manage to live on that remittance, they happily adjust to make it happen.
Jonas is content with everything the way it is. He does not waste time trying to change anything because he believes deeply in his star.
His popularity grows so much that his picture dealer increases his monthly remittance. Everyday his house is crammed with visitors and disciples who claim to want to learn from him. In reality, they want to be praised, and so he praises them. He is also solicited to take an active part in exposing revolting injustices and supporting protests. Jonas is always available and strives to meet everybody's expectations, but, eventually, he finds it difficult to satisfy everybody. Then criticism starts to strike him, no matter what he does. In the process of trying to meet everybody's expectations, his family is pushed aside, his art is left behind. He is no longer able to paint much. He does not find the time and the serenity to create.
When his best friend asks him about the criticism he endures,Jonas says to him:  "My painter friends who criticize me are not sure of existing, so they look for proofs, they judge and condemn. That strengthens them, it's a beginning of existence. They're so lonely. You have to love them." Then Jonas confides that he is not sure of existing either.
When his reputation declines, Jonas takes a distance from everybody and struggles to find the core of his own existence. He searches for his star.
He ends up building  a flooring halfway up the walls, a loft, to hide away from people. The story is filled with irony and humor. It exposes the conflict between the artist and the society he lives in. The artist could be any person in search for his identity when the expectations of others pull his strings in different directions, as a result of their own motivations, fears and interests.
There is a transformation in Jonas as he tries to reconnect with his own star which, to me, is his source of inspiration and conflict, his true self, his unique way of looking at the world.
Thank you, Albert Camus, for this timeless story.
Posted by Julia Hones at 6:38 AM 8 comments:

Email ThisBlogThis!Share to TwitterShare to FacebookShare to Pinterest
Labels: the artist at work Albert Camus conflict between individual and society

A different kind of movie: Mary and Max.

It is a clay-animated film about two strangers who meet through letters: Mary and Max.
Mary is an eight-year-old girl who lives in the suburbs of Melbourne, Australia. Max is a forty-four- year old man who lives in New York city. As their friendship thrives through their correspondence we learn about their lives, loneliness, questions and views with a touch of absurdity and a sense of humor. This interesting movie exposes different issues:
-Bullying
-Alcoholism
-Racism
-Conflicting relationships
-Mental disorders
-The challenges of being different
-The challenges of being oneself, and so much more.
I think it goes a long way in showing that no matter what country you live in, how old you are or what your gender is, there are similar problems that can connect us. In this case, two strangers became friends through affection, acceptance and understanding.
At some point,their friendship crumbles due to disappointment and a sense of betrayal. I appreciated the realistic side of it: who doesn't get upset with a friend? But the anger and sadness are followed by acceptance and forgiveness. Friends don't need to be perfect human beings to stay friends.
I enjoyed everything about it: the music, the clay-animated characters, the scenes, the themes.
The unexpected end of the story brought not just tears to my eyes but also the surprise that a clay-animated movie was able to connect so deeply with one's human emotions and sensitivity.
Posted by Julia Hones at 3:09 PM 6 comments: