The Invention of Morel 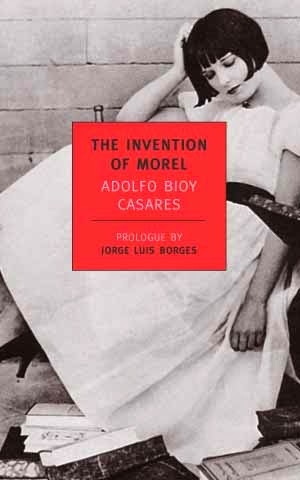 After being accused of a crime he did not commit, a man flees to an island by boat. This man is a writer. He documents his experiences in a diary.
This mysterious island has a museum, a church and a swimming pool.

Living on this island is an experience of survival and discoveries. This is a place that hides many secrets. The sea catches him by surprise if he is not attentive to the tides. Surviving is a daily challenge. He navigates the vicissitudes of freedom, uncertainty and solitude.

There are other human beings on this island, but they appear to be detached from him. One day he falls in love with a woman who contemplates the sunset every day. The woman ignores the narrator. Sometimes she reads a book. Sometimes a man with a beard is by her side, conversing with her. This man's name is Morel. Is she in love with Morel?
Is this woman a real woman? Is the narrator truly in love with this woman, or is he obsessed with her?

One cannot help but wonder, along with the narrator, if the other people on the island are aware of the writer's existence. Are they planning to catch him? Do their conversations have anything to do with his life?

Suspense, intrigue and magical realism intertwine throughout the novella to encourage our imagination to play with the vivid settings of this enigmatic island, and as we follow the writer's story, the limits between fantasy and reality become blurred.
We are invited to accept our creativity as the soul of our own existence or as a projection of somebody's desires.

The Invention of Morel is a novella written by Adolfo Bioy Casares(1914-1999), an Argentinian author who won several awards, including The French Legion of Honor (1981), The Diamond Konex Award of Literature (1994) and the Miguel de Cervantes Prize (1991).
Posted by Julia Hones at 2:38 PM