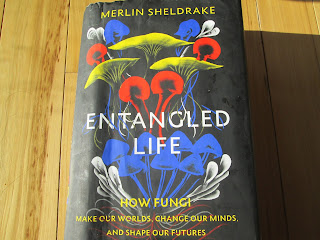 “Fungi are everywhere, but they are easy to miss. They are inside you and around you. They sustain you and all that you depend on. As you read these words, fungi are changing the way that life happens, as they have done for more than one billion years. They are eating rock, making soil, digesting pollutants, nourishing and killing plants, surviving in space, inducing visions, producing food, making medicines, manipulating animal behavior and influencing the composition of the Earth’s atmosphere. Fungi provide a key to understanding the plants on which we live and the ways we think, feel and behave. Yet they live their lives hidden from view, and more than ninety percent of their species remain undocumented.” Merlin Sheldrake

If these words catch your attention, you are not alone. It is the first paragraph of the book “Entangled Life”, a fascinating exploration of the life of fungi. Did you know that you have more microorganisms in your body than human cells? Some of those microorganisms are fungi. Fungi are everywhere; they are not only present in our bodies. They are in the clouds, influencing the weather. They are on the sea floor, on the surface of deserts, in the frozen valleys of Antarctica, in the soil under our feet. They have the capacity to adapt to different habitats. The ecosystems of microorganisms in our bodies help us to digest food, to nourish us, to support our immune system, and may even influence our behaviors (check references 1 and 2 at the bottom of this post). These interactions are not unique to humans. Even bacteria have viruses within them, and viruses can contain smaller viruses.

Fungi are neither plants nor animals. Plants make up 80% of the mass of life on earth and they are the base of the food chain. However, 600 million years ago, there were no plants on land. Back then, life was an aquatic event and there was no soil as we know it now; only rocks, where minerals were locked. Merlin Sheldrake explains that “plants made it out of the water around 500 million years ago because of their collaboration with fungi, which served as their root systems for tens of millions of years until plants could evolve their own.”

Here is a surprising fact that is often overlooked: ninety percent of plants depend on fungi to survive and thrive. The intimate partnerships between plant roots and mycorrhizal fungi allow the plant to take in water and minerals from the soil. Fungi also provide 80 percent of a plant’s nitrogen and a hundred percent of its phosphorus. Likewise, the fungi benefit from the plants by gaining access to food produced by the plant. Mycorrhizal fungi are connected to plants and trees through shared networks. “Mykes” in Greek means fungus; “rhiza” means roots.

Unsustainable agricultural practices ignore these vital relationships between plants and fungi. Did you know that a teaspoon of healthy soil contains more bugs than human beings in the planet? Fungi represent at least one third of the living mass in the soil. The role of fungi in soil ecosystems is an active field of research. Fungi networks in the soil prevent the loss of nutrients in it, and help to regulate the water, so they support the soil under extreme weather conditions that lead to droughts or floods.

The levels of carbon dioxide in the atmosphere, climate changes and pollution influence the interactions between plant roots and mycorrhizae, and the effects have an impact on ecosystems. A study published in 2018 found that the deterioration of the health of trees across Europe was the consequence of a disruption of their mycorrhizal relationships, which was triggered by nitrogen pollution.

The term “mycorrhiza” was coined by biologist Albert Frank in 1885; his study of lichens, symbiotic partnerships of fungi and algae, led to the use of the word “symbiosis”. Frank’s passion for the study of mycorrhiza spurred him to focus on the research of mycorrhizal relationships for more than a decade; back then, other scientists opposed his ideas on symbiosis as some kind of “sentimental illusion” that could not materialize in nature. 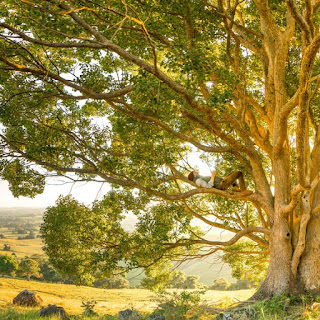 Reading “Entangled Life” is akin to climbing a tree. The higher you ascend, the more views and perspectives you gain. As you clamber up a branch, more questions arise, and the adventure of knowledge guides you to embrace how everything is deeply interconnected to function within the delicate web of life.

Merlin Sheldrake shares his wonder for fungi in “Entangled Life” the way Sara Dykman explores the life of Monarch butterflies in “Bicycling with Butterflies. They both captivate us with creativity, facts and artistry.

Merlin Sheldrake is a biologist and a writer. He received a Ph.D. in Tropical ecology from Cambridge University for his work on underground fungal networks in tropical forests in Panama, where he was a predoctoral research fellow of the Smithsonian Tropical Research Institute. He is also a musician. You can visit his website here: